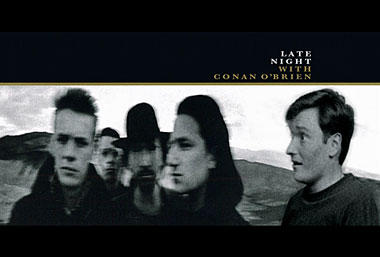 Today was a nice and calm Monday ... read at Koorong in the morning and had a late lunch at the Sydney Fish Market (seafood platter) with Hermz and Mins. Mins got promoted to manager at his new job ... I think they forgot to do a background check on him before making that decision (hee hee ... kidding ... congrats Mins!). And he was sporting his new car around West Ryde too ... a sleek 15 year old Hyundai without power-steering ... I think he wanted to work on his arms a bit =) Lookin good Mins ...

And now for some U2 News. U2 was on "Late Night with Conan O'Brien" last night in the US and instead of just being one of the guests, they were the whole show for the whole hour (!) ... if anyone in the US recorded it, let me know =) I'd love to watch it.

The also did four songs, live for the studio:

• All Because Of You,
• Original Of The Species
• Stuck In A Moment You Can't Get Out Of
• Vertigo

EDIT: You can watch some clips from the show at the NBC site here.

And their newest single, "All Because of You" came out today in the UK and Europe. It's a cool song that basically is a praise to God, thanking Him for all His blessings upon their lives. The chorus: "all because of You, I AM" (a direct reference to YHWH, the Great I AM). I love how their most recent album has so many prayers to God in it.

They still haven't announced their 2006 concert dates yet (!) ... they better make it to Sydney ... and if they do, we'll have to make it an all-church event =) Their Chicago concert (which I thought about trying to make it to in May but couldn't ... since I had to be at my graduation! Can you believe I was debating that one??) was recorded and is going to be released as a live DVD in November (d'oh!) ...

And on a final note, my previous guestbook server disappeared =( So my apologies to those whose messages are now gone (Lee, I think you have to send me your phone number again!) ... but I now have a new one created ... with a better 'look and feel' to it =)

Hahaha it never ceases to amaze me how much of a U2 nut you are Eddie~ puhaha~
Just wondering if they ever do acoustic versions of their songs, particularly some of the newer ones from the last two albums?

Yep. They usually do an acoustic set of various songs during their concerts. I have some if you want to hear :) Better yet, when they come next year, we can all hear it live together :)

been out of this for a bit~ :D glad to hear that you are back safely! I'm sure you experienced HEAPS out there! hope u recover well, but don't think u will cuz u're going away soon again!! well hope u make the most of it! talk to ya later!!

try Coldplay Eddie.
U know you want to!!

EBae: good to hear you're alive and well :)