Thanking God for the Life of Dr. James Kennedy

James Kennedy, the founder of Evangelism Explosion (E.E.), passed away and entered eternal glory yesterday and I'm sure a pretty cool party was thrown in heaven for him, for his ultimate homecoming. Both directly and indirectly, E.E. has been used to help share the Gospel to millions of people around the world.

I own a huge debt of thanks for this man's ministry that taught me how to articulate and share my faith. Back when I was in jr. high, and after tasting salvation for the first time, I was so pumped about the lost but had trouble knowing exactly what to say to my not-yet-Christian friends around me. I *tried* to witness ... starting with the book of ... ahem ... Revelation (!) ... and shared about the end times when Christ comes and final judgment. I would have informal Bible studies on Revelation in the school cafeteria, but I knew I needed to improve in this Gospel sharing thing instead of just answering questions about the Beast and the anti-Christ that were to come.

So in high school, some friends of mine from Hebron Church (Rich Khong and Joshua Ku) told me about the Evangelism Explosion course their church goes through and I was sooooooooo excited to sign up and take that course. We didn't learn much in week one, but the little I learned, I began to share with friends around me and I started to see people get saved (I think the homework for week one was simply to memorize the words: God, man, sin, Christ, grace) ... but hey, that was more than I knew before! So I took steps of faith, I shared, and God saved. It was the beginning of a new passion for evangelism and the lost that consumed my heart. And later on, EE combined with the Navigators Bridge to Life would turn into the basic Gospel message that I still use to this day whenever I preach to a new group of people.

So any fruit that came out of my Gospel sharing for the past 17 years was always somehow connected to Kennedy's ministry. For that I am eternally grateful. As I heard the news about his death on the radio yesterday, they shared how he would turn down speaking engagements (which would often be at very large gatherings) so that he wouldn't miss taking 2 people from his church out for evangelism training.

A humble and faithful man, used by God to train the world, for the salvation of many. This is one verse that I think represents Kennedy's life ...

"Those who are wise will shine like the brightness of the heavens, and those who lead many to righteousness,
like the stars for ever and ever."
Daniel 12:3
I'm so excited to know that he's shining in eternity now ...

Posted by Unknown at 4:36 AM No comments: 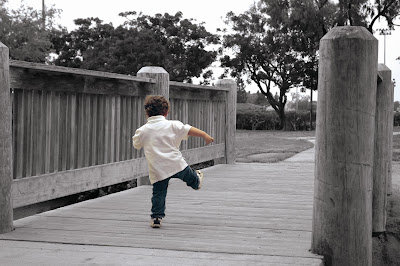 In honor of Father's Day here in Australia, this week's message was from Ephesians 6:1-4 on the role of fathers and children in the family of faith. Here are the download links: Sermon MP3 (iTunes), the Sermon Handout, and the Weekly Memory Verse.

Hyun and I will be spending the next several weeks in Korea and various parts of the US to pray and prepare for our possible (probable?) move sometime next year. Please pray for God's clear guidance for us as we meet with different people and pray through different cities. Thanks and hopefully I'll be able to update during our travels.

And I'd like to also ask for prayer for one of our worship leaders whose name is Robert. He just found out that he has cancer in several (about 6-7) parts of his body. He's in pain, but he still led worship today without letting anyone know until after our service. Please pray for God's mighty healing power to be displayed in Robert's life. Thanks so much.

Posted by Unknown at 5:58 PM No comments: